The History and Glory of French Furniture

The French are always known for their art, romance, wines and food. They know the art of making life comfortable and as beautiful as it can be. No civilization is known to be sensible more than French to enjoy furnishings and decorative arts. The history of French furniture is very long, consists of many eras and every era is known for its own style. Following is a brief intro of eras which help us to understand different styles of French furniture. 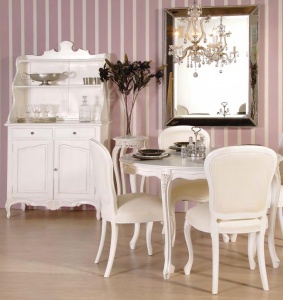 Romanesque and Gothic Periods are actually recognized as the middle ages. Oak was largely used for the manufacture of French provincial furniture and overall furniture used to be simple and large like benches, stools and chests.

Deep carving was common in the renaissance age and French craftsmen used to make furniture with lavish designs which was the reflection of roman sensibility. The French furniture of this age including cabinets and buffets were like small buildings having architectural columns, panels and windows.

The demand of French provincial furniture was raised in this age and many Italian craftsmen started coming to France to serve the purpose. The very famous Os de Mouton Chair belongs to this age.

Louis XIV is considered the most renowned king of France and was the lover of the arts. In his kingdom, there was a separate department for architecture and the furniture of his age was largely dependent upon heavy carving and marquetry.

This age belongs to Louis XV and furniture used in this age was decorated by flowers, shells and dragons. This age also gave rise to the trend of caning and marble accents. Regence furniture is one of the most famous styles among antique lovers.

The furniture of this age was based on the complicated inlaid work and floral designs. This age was largely known for using sculptures of animals like eagle, dolphin or ram’s head for the decoration of furniture.

This age did not continue marquetry anymore and geometrical patterns were widespread. For the very first time, Egyptians motifs were used in this age and carving was also promoted.

Napoleon I was the emperor of France in this age and Directoire style was continued in this era. Egyptian motifs and marble tops were used in the making of French furniture. Napoleonic symbols like, the bee and large “N” were mainly used for the decoration of furniture.

The downfall of Napoleon gave rise to the art of marquetry and decoration of shabby chic furniture involved flowers, garlands and rosettes. Musical instruments were commonly carved into the legs of tables and desks in this age.

This era gave rise to the manufacture of French furniture sets for bedroom and dining rooms. Past designs from Gothic, Renaissance, Louis XIII and XV were returned and became popular with bourgeois class.

French history does not refer Country French as a period but it is far more a way of life. Designs referred to as Country French are inspired from different ages are now loved well.

Our customer service and warehouse team are still processing and delivering orders although the usual delivery timescale for orders are taking longer than usual. We are advising to allow an additional 3-5 working days to receive orders. Our couriers are working with precaution to deliver goods at a safe distance without close interaction.

Below are the current expected delivery times and more infomation on how our delivery proccess has temporarily changed for some larger products;

Furniture Orders with Advertised Delivery Times Between 10-15 Working Days –  All of our products are available (subject to stock availability). Our courier we use to deliver goods to room of choice are working with measures in place to deliver goods at a safe social distance wearing the appropriate face masks and gloves. Delivery times are currently taking a little longer than usual. We estimate delivery times for large furniture are currently 5 working days longer than the usual stated delivery time.


Smaller Products with Advertised Delivery times between 1-5 working days – Our express couriers are operating as normal and will deliver goods safely and make sure goods are taken by a consignee at the delivery point before leaving. No signature is required. We are needing more time to proccess these orders due to the way we have changed our warehouse operation. We expect all orders to take additional 3 working days longer than advertised.

We wish everyone to stay safe and well.